Ilocos Norte Representative Angelo Marcos Barba brought local wines Basi Puro and Ambaristo for the House of Representatives’ vlog to promote tourism in his home province. According to Mr. Barba’s Facebook page, the wines, along with other Ilocano products, will be shown in the video blog Cong Tour (Congressional Tour), a project of the House Committee on Tourism. 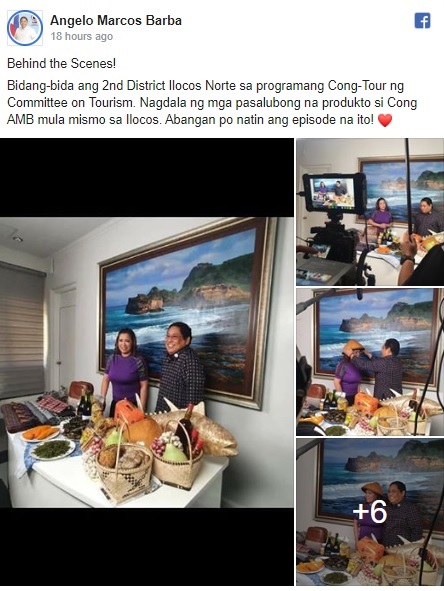 The congressman of Ilocos Norte’s second district is a staunch supporter of local products, according to the resident winemaker of Basi del Diablo Wines Sigrid Salucop.

“Congressman Barba has always been very supportive of the local wine industry and other small players in the food and beverage scene here in Ilocos Norte. We are very happy that he thought of including us in Cong Tour,” Salucop says.

In a privilege speech back in 2019, Laguna Representative and co-host of Cong Tour Sol Aragones said that Cong Tour “will show the congressmen’s active involvement in the promotion of tourism in their districts, aside from fulfilling their lawmaking functions”. Congresswoman Aragones also added in her speech that tourism contributed 12.7 percent to the Philippine economy in 2018.

Basi del Diablo is very pleased with this development.  “The project will surely boost domestic tourism expenditure and I am thankful that the House Committee on Tourism is actively promoting local products. We need that. The show also has fringe benefits. One of the most important is it gives Filipinos an insight on how diverse the country is in terms of its local products. There are so many wonderful local products just waiting to be discovered. Cong Tour will help all of us with those little discoveries and may even aid in our understanding of our own culture,” Salucop says.

Data from the Philippine Statistics Authority in 2018 shows that domestic tourism made a whopping PHP3.2 trillion.